ADVANCED TICKETS: 14 € standing | 19 € seating
TABLE RESERVATION: after buying a seating ticket you have to reserve a table. By phone +370 680 21 534, or e-mail club@tamsta.com. Without reservation places are picked up randomly.

Expression and playfulness. This is Monika Liu who is releasing her new album „Lünatik” in 24th of October.
‘Every song was born from a love story’ – says Monika Liu and adds that with this album she will reveal another, not musical talent.

Extremely artistic performer can become anyone on stage – a fashion icon in fifties, impudent rebel or new trend dictator. She can rap in her hoody or be jazzy in sparkling dress.  She is like a chameleon having this amazing voice, which a singer was developing in Berklee College, Boston and in London. Monika Liu always attracts her listeners so what is she preparing this time ? Will she be wild or melancholic? This time Monika tends to be more romantic – everything will be about love, and one song she dedicates for all broken hearts…
As an introduction to new album, this spring Monika Liu released very extravagant song ‘Komm Zu Mir’. Although singer had very intense summer – she became a coach in television project ‘The Voice’, she was still working on her new album and invites us all to meet in live music club ‘Tamsta’.

”Lünatik’ music was inspired by London and New York City. All new songs were written there. By the way, some of pieces were produced by me, which marks my new stage of life as an independent artist.’ – says Monika Liu. Other songs were written and produced together with music business beginners and already acclaimed London producers.
Songs in new album are unified by art pop and indie pop music styles, by the way, this music is strongly connected with visuals. And in this album they are special – all visualisations were created by Monika Liu, in this way revealing her another talent. Once she told us that her home are full of her paintings, but they have never been shown in public.
‘This Album marks an important stage of my life. I am super happy, that not only songs, but also my paintings will finally reach my listeners. As well as music videos. You can find four music videos in this album. I hope that all of this will immerse people into a very interesting and different love story’ – hopes Monika Liu, who will present her new album in 24th, October in live music club ‘Tamsta’.

Monika Liu – Journey To The Moon 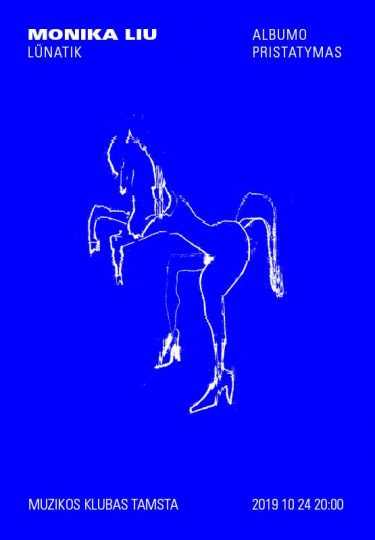