On September 18 in Tamsta Club in Vilnius, the Warsaw-Vilnius band BABADAG will perform the material from their latest album “ŠULINYS” released in January 2019.
BABADAG is a band which exists on the border: literally, between Poland and Lithuania, and metaphorically: between tradition and modernity. Half of the band are musicians from Warsaw: Sebastiana Witkowski, Igor Nikiforow and Radosław Mysłek, the other half – singers from Vilnius, the three Kriščiūnaitė sisters: Lauksmina, Raminta and Dominyka; the two groups were brought together by Warsaw-born singer-songwriter Ola Bilińska.
Ola Bilińska, stunned by the beauty of the ancient Lithuanian canons sutartines and by the Kriščiūnaitė sisters’ harmonious voices, asked them to work together to “make it new”: to introduce this tradition to a broader, modern audience.
Thus, BABADAG have weaved their songs around traditional Lithuanian melodies, folk lyrics and stories, motifs from Lithuanian and Slavic mythology, adding modern instruments, arrangements and sensitivity.
BABADAG’s music stems from a longing for the presence of the fairy-tale and the myth in the daily, mundane reality that surrounds us. It’s a musical materialization of the need of being a part of tradition, a part of nature.
Halfway between Warsaw and Vilnius, on the border of nature and culture, BABADAG tries to fathom this mystery on its own terms: with music, words and the energy flowing from the act of creating beauty together.
The Babadag concert in Tamsta Club in Vilnius is the official Lithuanian premiere of the album “ŠULINYS”.
It will be also an artistic interdisciplinary event: the Warsaw-based artist Ewa Łuczak has created a visual installation inspired by music from the album, acting as the set design of the concert.

Organiser: Fundacja ARTinTRANSLATION.
Media patronage: Lithuanian Radio LRT.
The concert is co-financed by the capital city of Warsaw.
Fall in love with Warsaw!” 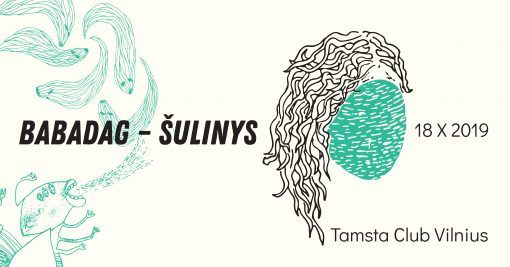